Andy Warhol – A Brief History into The Man, The Artist, The Legend. 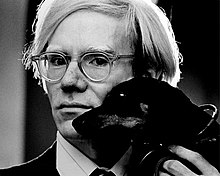 Pop art  was an experimental form that many artists were independently adopting. Warhol, who would become famous as the “Pope of Pop”, turned to this new style, where popular subjects could be part of the artist’s palette.

His studio, The Factory, was a well known gathering place that brought together distinguished intellectuals, drag queens, playwrights, Bohemian street people, Hollywood celebrities, and wealthy patrons. He loved celebrities, so he painted them as well.

Instead of working on a signature subject matter, as he started out to do, he worked more and more on a signature style, slowly eliminating the “handmade” from the artistic process. At the height of his fame as a painter, Warhol had several assistants who produced his silk-screen multiples, following his directions to make different versions and variations.

Warhol died in Manhattan, at 6:32 am, on February 22, 1987. According to news reports, he had been making good recovery from gallbladder surgery at New York Hospital before dying in his sleep from a sudden post-operative cardiac arrhythmia. 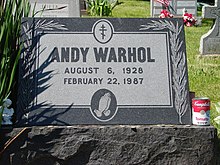 Warhol’s body was taken back to Pittsburgh, by his brothers, for burial. The coffin was a solid bronze casket with gold plated rails and white upholstery. Warhol was dressed in a black cashmere suit, a paisley tie, a platinum wig, and sunglasses. He was posed holding a small prayer book and a red rose. Warhol was buried next to his mother and father. Later, a memorial service was held in Manhattan for Warhol on April 1, 1987.

Please check GallArt.com blog every week in February for a closer look into the works of Andy Warhol.