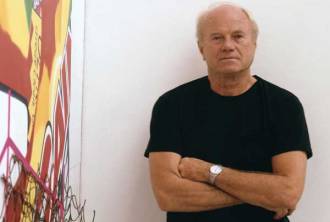 Rosenquist was born in Grand Forks, N.D. His watercolor of a sunset won him a scholarship to take classes at the Minneapolis School of Art. He later moved to New York City in 1955.

Rosenquist started by painting signs on billboard advertisements in Times Square and other public places. He later incorporated images from popular culture, such as celebrities and consumer goods into his work. He is well known for his large-scale, fragmented works that bring the visual language of commercial painting onto canvas

Rosenqiust’s paintings very rarely contained overt political messages, although his best known work, “F-111”, was made in 1964 and 1965 in part as a protest against american militarism. The image is of a modern fighter plane stretching 86 feet across a grid of fifty one canvas’ and aluminum panels,is interrupted by images of an enormous tire, a beach umbrella, a mushroom cloud, spaghetti and tomato sauce, as well as a little girl under a chrome hair dryer that resembles a warhead.

In his later years he spent much of his time in Aripeka, FL, just Northwest of Tampa. Here is where he kept a home and studio until 2009, when a catastrophic fire destroyed the properties. Rosenquist then returned to his home in New York City where he would spend the rest of his days.

Artist James Rosenquist, a key figure in the Pop Art movement, died on March 31st, 2017 at his home in New York City after a long illness.

“Derriere L’Etoile” (left) and “Violent Turn” (right) are a part of the same suite. Both of these works are on display at Gallery Art in Aventura. You can also view more works by James Rosenquist by visiting us at GallArt.com